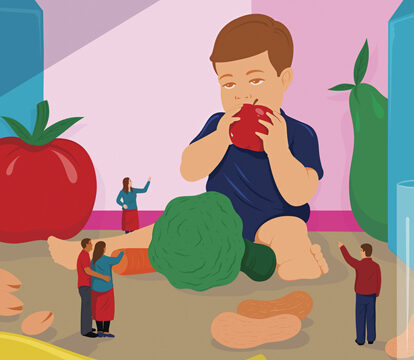 Premise In modern society, painful and / or annoying sensations, referring to the gastrointestinal system, are widespread among the population. The most frequently attributed causes are stress, the frenetic pace of life and foods rich in fat and low in waste. The importance of these psychosocial factors is undoubted, but the researchers continue to investigate organic causes, which may explain the etiopathogenesis of the disorders.

Let us think of the recently discovered Helicobacter Pylori, which proved to be responsible for the peptic ulcer, another disease for which psycho-emotional problems were and still are invoked as a causal element. This aspect is important, but often our Patients repeat to us that the symptom they complain is dissociated from evidence of psychological distress.

The research activity on gastrointestinal functional disorders has increased in recent years, due to the high prevalence with which they occur in the population, generating widespread discomfort, as well as a high health and social cost. The refinement of diagnostic, biochemical, neuro-pathophysiological and imaging techniques allows to evaluate the inflammatory, immunological and neuro-physiological aspect of the problem, defining, in an ever more accurate way, the existing relationships between the enteric nervous system and the nervous system central. Pain nerve pathways, inflammation mediators, neurotransmitters and neurohormones are imputed.

The classification of these functional disorders, according to the “Rome criteria”, highlights an overlap between physio-pathological and psycho-social factors. Among these disorders, irritable bowel syndrome is particularly common, characterized by abdominal symptoms and alterations of the hive. Patients complain of widespread pain, mostly related to bowel movements. The stools are pulpy or watery, in the clinical variant with a diarrheal component, or hard and goat, in the constipated variant.  Gastro-oesophageal reflux disease also has variants of mere functional aspect. We think of the subgroup classified as hypersensitive esophagus or that of functional heartburn, where there is a total disagreement between symptoms and the pH-Impedance trace.

In this chapter I will talk about food allergies and intolerances, which must be investigated, together with all other possible causes, in patients who present these painful and / or annoying abdominal sensations. I said that overlapping causes of the problem are frequent. Investigating them all is a must, to arrive at the diagnosis and to set the most suitable therapy. Food intolerances and allergies are involved in a high percentage of cases, although clinical evidence often demonstrates a disproportion between the symptoms and the degree of deficit.

Patients often, in the hope of finding a solution to their problems, turn to non-conventional medicine and diagnostic tests not validated by official science.Food allergy Food allergies and intolerances are reactions against some substances, mostly nutrients, and include intestinal disorders, but also extra-intestinal, caused by the ingestion of foods, which contain nutrients or additives or food contaminants, which trigger the adverse reaction. These adverse responses fall into two broad groups: toxic and non-toxic reactions.

Non-toxic reactions are food allergies and intolerances. The former are due to allergenic substances for the patient’s body, which are therefore defined as antigens or allergens, harmless for most people. The second, intolerances, cause disorders similar to those of allergies, but do not have an immunological pathogenesis. Toxic reactions are related to the dose taken and the adverse reaction is all the more serious the greater the quantity ingested. They do not involve the patient’s immune system and often, but not always, relate to substances harmful to the majority of the population, called poisons. Toxic substances can be present in nature in food (as in some poisonous mushrooms) or appear after a transformation, linked to hygienic conditions, food conservation or other.